On Wednesday, January 28, 1874, the U.S. Department of the Interior issued the order that began New Mexico’s Colfax County War.

The Department had decided to designate the approximately 2 million acres claimed by the Maxwell Land Grant and Railroad Company as public land, not private. This meant that the former Beaubien/Miranda land grant was now open to settlement under federal homestead laws.

The Interior Department’s decision was part of an ongoing dispute over the size of the Land Grrant. According to the Department, until that matter was settled in Federal Court, the land was public and therefore available to qualified homesteaders.

But the Land Grant Company wasn’t about to let anyone settle without payment on acreage they claimed as their own. And that payment certainly wasn’t going to go to the U.S. government.

In fact, the Company was already fighting settlers on the vast acreage they claimed. Their attorney, Frank Springer, was hard at work in New Mexico’s Territorial Courts, evicting anyone the Board believed shouldn’t be there. With evictions already occurring, opening the Grant lands to federal homestead claims was simply asking for more trouble. 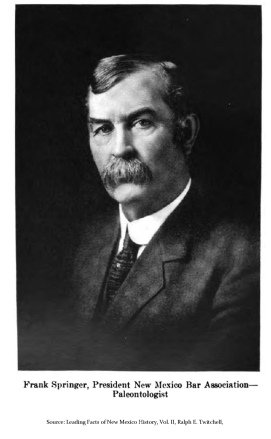 And it came. If the Company couldn’t get rid of “squatters” through the courts, they’d try other strategies. This all cost money, of course, something that the Board was often short of. But even as the Company teetered on the edge of bankruptcy, its board members continued the fight. If this required extra-legal methods, then so be it.

Right about the time the Department of the Interior announced its decision, another factor arrived in Colfax County. His name was Reverend Franklin J. Tolby. Tolby believed that the Maxwell Land Grant and Railroad Company was taking more than its share of local resources. In fact, he advocated that some of the acreage in dispute be handed over to the Native Americans who’d hunted and lived there long before anyone even thought that American capitalists would have a use for it.

Tolby was articulate and people listened to him. This put him solidly in the sights of the Company’s board members. A lot had happened on the Grant up to this point: legal and extra-legal evictions, miners’ protests in Elizabethtown, meetings of concerned citizens in Cimarron, heated newspaper articles for and against the Grant Company. But none of that compared to what occurred after January 28, 1874. The Colfax County War was about to begin.

By the time it was over, Reverend Tolby and others would be dead, homesteaders would be burned or run out, and the Land Grant Company would be on the verge of yet another reorganization. The grant never did return the profit its investors had hoped for.

As with most wars, everyone got hurt in the end.