The miners in the Elizabethtown, New Mexico area were mighty frustrated. There just wasn’t enough water to satisfy their need to wash the gold out of the flanks of Baldy Mountain. They were willing to pay, but there was no one selling. But on May 28, 1868, their problem appeared to be on the way to being solved, because construction began on the Big Ditch.

Designed by a East Coast-educated former Army Engineer Capt. N.S. Davis, the Big Ditch project would employ over 400 men to construct a 41-mile system of reservoirs, dams, and wooden trestles that would funnel Red River’s headwaters to the placer mines on Baldy Mountain’s western flanks. About 7.6 million gallons per day (600 miner’s inches) were anticipated, water enough to supply all the miners in the district.

Or so they thought. The problem was that, as the water sat in the three reservoirs, then flowed through the landscape and the primarily wooden flumes on its 41 mile route to the mines, leakage in the flume and evaporation into the dry New Mexico air sucked much of the anticipated liquid right out of the system. When the water bean to flow the following July, only about 1/6 of the expected amount actually reached its destination. Just over one million gallons a day, or about 100 miners inches, remained for the miners to use. 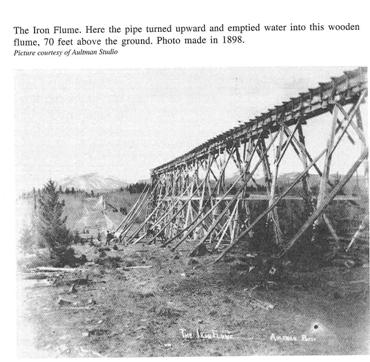 Not only was there not enough water, selling what there was wouldn’t return the $280,000 cost of construction to the original investors. The price of 50 cents per miner’s inch simply didn’t cover the amount invested. The Big Ditch changed hands several times until it was eventually sold to Irish-born Matthew Lynch, who jerry-rigged the system sufficiently to provide for his own hydraulic mining operations and leave a small surplus to sell. So the Big Ditch did turn out to be useful, just not to the level originally projected.