150 years ago today, on May 13, 1867, a group of New Mexico Territory miners met to organize the Baldy Peak/Elizabethtown Mining District. Chaired by John E. Codlin of New Jersey, the committee established the dimensions for lode and placer claims and the amount of necessary to keep a claim active. They also elected a recorder to take responsibility for filing mining, water, and timber rights notices, along with bills of sale and property deeds. 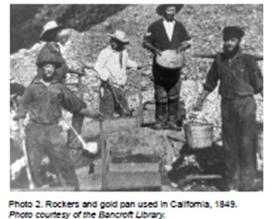 The need for organization was urgent: As many as 400 mining claims had already been staked within an eight mile radius of Baldy Peak.  This included Ute Park, where prospectors Tim Foley, Matthew Lynch, and Robert Doherty had found gold in the bed of Ute Creek, a find that would lead the following year to the discovery of the Aztec Mine, a mine that would produce over $100,000 in gold between October 1868 and July 1869.

Most of the districts placer claims were on Baldy’s western slopes, in gulches that ran from the mountain into Moreno Creek, and in the gravel in the Creek. The mines were concentrated along the lower slopes and along the Creek between Mills Gulch, three miles north of Etown, and Anniseta Gulch, 2 miles south. In addition, there were placers along the upper reaches of Willow Creek on Baldy’s southern slopes, on Ute Creek below the Aztec, and in the upper reaches of South Ponil Creek, near the outcrop of the Aztec vein.

It was only fitting that the 27-year-old New Jersey-born John Codlin should chair the effort to organize all this. He’d been part of the group (with Irishman Patrick Lyons, Prussian-born Fred Pfeffer, and a man called “Big Mich”) who’d first discovered gold at what is now Elizabethtown, a few hundred yards east of the where the town was eventually laid out, in what they named Michigan Gulch. They worked the gulch as the Michigan Company.

Codlin seems to have developed a taste for politics. He would go on to become the chairman of the Colfax County Commission in 1897-98 and to fight the 1897 transference of the county seat from Springer to Raton, a legal challenge that eventually made its way to the Supreme Court, which decided in favor of Raton. He died in April 1908 and is buried in the Springer, NM cemetery.