On May 1, 1894, the stagecoach once again arrived in Etown, New Mexico: The Springer and Moreno Valley Stage Line began daily passenger runs between Elizabethtown and Springer, where passengers could connect with the railroad. Even with fares at $5 a day, demand was high. The line was soon running double headers every other day. It didn’t just carry passengers. There were also contracts with Wells Fargo Express and the United States Post Office. In fact, the endeavor was so lucrative that H.H. Hankins jumped to serve the same route with the Moreno Valley Stage and Freight Company line. 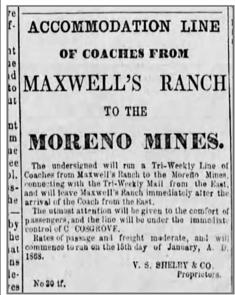 These transportation services replaced Col. Valentine “Jim” S. Shelby’s 1868 Moreno Valley Stage and Freight Line, which had run three times a week between Maxwell’s Ranch (today’s Cimarron) and Elizabethtown, departing from Maxwell’s one day and returning from Elizabethtown the next. Fares in 1868 were $8 each way. Shelby, a former army wagon master, seems to have enjoyed a good challenge. A co-owner of the Aztec Mine, he also helped fund the construction project that diverted water from Red River to the Baldy Mountain mining district, then took it over when it failed to live up to projections, on the chance that he could find a buyer—which he did. Shelby eventually left the Etown area and ended up in Santa Fe, where he ran a large gambling “resort”—yet another service in high demand in New Mexico Territory.