Tuesday, March 10, 1862 was a momentous day for New Mexico. That morning, Confederate troops from Texas seized control of Santa Fe. Led by Brigadier General Henry Hopkins Sibley, the Texans had moved steadily north through New Mexico since the previous July, receiving little opposition and clashing with Union forces in only one major battle, which they’d won.

By this time, the Texans must have been feeling pretty confident about making it to Denver and its gold fields. The idea was to seize those resources and use them to restore the Confederacy’s fortunes (literally). Then Sibley and his men would press on to California and the Pacific, opening its ports to Confederate shipping and sidestepping the Union blockades on the Eastern seaboard.

But late on March 10, Colonel John Potts Slough and his 950-man First Regiment of Colorado Volunteers (aka the Pike’s Peakers)  arrived at New Mexico’s Fort Union, more than doubling the number of men available in New Mexico to face down the Confederates.

Slough abruptly assumed command of the Fort. Although the Denver attorney had been in the military for only six months, he’d been a Colonel longer than twenty-seven-year veteran Colonel G.B.  Paul, who was in charge before the Pike’s Peakers arrived. But Slough, ever concerned about his rights and privileges, pulled rank, and Paul conceded his position as Commander, albeit unwillingly. Then Slough got busy outfitting his Pike’s Peakers with clothing, arms, and ammunition from the Fort Union supply depot. 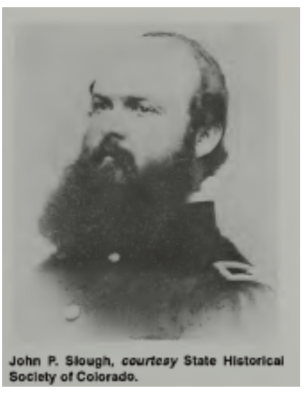 Meanwhile in Santa Fe, Sibley’s Confederates  were also looking to their supplies. Their lines had been stretched thin on the march north and the Union supplies in Santa Fe had either been moved west to Las Vegas with the Governor’s baggage or skillfully hidden.

The Confederates’ stores were dangerously low. Although getting to Santa Fe had been quite an accomplishment, they badly needed Fort Union’s supplies if they were going to make it all the way to Denver.

But on March 10, they didn’t have a lot more time to worry about their situation. In less than two weeks, the thin-skinned and arrogant Slough would begin moving his men south out of Fort Union, then west toward Santa Fe. What would become known as the Battle of Glorieta or, more dramatically, the Gettysburg of the West, was about to begin.