The almost-invisible lizard sunning himself on a rock or a log is a common occurrence  in New Mexico. I almost stepped on one in the garden this morning. However, I would never have thought to use a lizard as a metaphor for a detective and “fixer.” But Pamela Christie did, and the resulting books are a fascinating look at New Mexico in the 1780s. 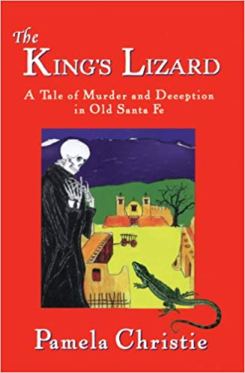 In The King’s Lizard, Christie introduces us to the Old New Mexico version of the invisible person—the half-Ute, half-Spanish Fernando “Nando” Aguilar who lives in a kind of limbo between his Spanish and Native origins. This liminal status makes Nando easy to overlook. But it also gives him access to both the Native and Spanish worlds, an access which makes him a valuable tool for Governor Juan Bautista de Anza.

Governor Anza has been tasked with creating a lasting peace with the Comanche. But there are men in New Mexico who don’t want peace. Unsettled conditions give them access to human contraband. And contraband sales fund a more-than-comfortable lifestyle. Nando becomes part of these men’s merchandise and then, after he escapes their clutches, the key to destroying the slave network as well as providing the Governor with a path to peace.

In Dead Lizard’s Dance, Nando once again saves the day, sorting out a plot that not only threatens the Governor, but also his own family’s security. Rumors of witchcraft go hand in hand with the struggle to control the caravan of goods to and from Mexico that is the colony’s lifeline.

This particular novel also highlights the status of women in the colony, and it isn’t a particularly pretty picture. But Nando protects the women he can, including those who’ve exacted revenge on a man who’s made a life’s work of abuse and betrayal.

Lizard’s Kill appears to be the end of the road for Nando’s work for Anza, because the Governor’s term of office has ended.

He’s on his way back to Mexico and retirement. But Anza has one more service he hopes to perform for New Mexico and only Nando Aguilar has the skills to achieve the impossible.

Christie brings a deep knowledge of a complex bygone world  to these three books, a knowledge that seems to expand with each story. Her writing and her observations about New Mexico life and politics in the 1780s grows more deft with each novel. If you’d like to know more about this period and are looking for a good mystery series to dive into I recommend these books.

P.S. All of these books are also available directly from Pamela Christie, who says she prefers direct contact with her readers. And she’ll also cut deals! You can contact her at christiepr@gmail.com.