On January 25, 1869, eighteen months after Elizabethtown, New Mexico was founded in Mora County, New Mexico’s Territorial Legislature cut the County into two pieces and renamed the northern section Colfax County, in honor of the new U.S. Vice President Schuyler Colfax. Elizabethtown became the county seat. Schuyler Colfax had visited northern New Mexico Territory in late 1868, shortly before being sworn in as Ulysses S. Grant’s Vice President. Colfax was a journalist and politician from Indiana and was expected to one day be President. 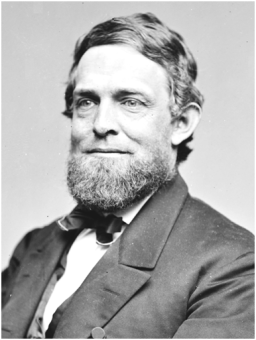 Unfortunately, the Grant administration scandals ruined those hopes, as well as the hopes of those who thought naming the County after him would be a smart move. When it was created, Colfax County included the entire Maxwell Land Grant, except for 265,000 acres in southern Colorado, and extended to the Texas/Oklahoma border, encompassing what is now Harding and Union County.