On the morning of Monday, February 18, 1878, on an otherwise-deserted road in Southeast New Mexico, a young Englishman was shot and killed, and event which initiated the Lincoln County War.

The young man was John Henry Tunstall. He and Alexander McSween had been in the process of organizing a business  partnership when McSween was accused of absconding with some life insurance money. Although Tunstall wasn’t legally responsible, he was wealthy and he was friends with McSween, who had already ruffled feathers in the County. The court decided that Tunstall should participate in repaying the $8,000 involved. 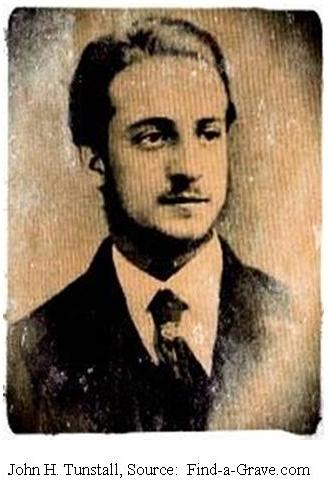 That Monday morning, Tunstall was on his way to the town of Lincoln to try to negotiate a settlement in the case. Instead, he and the four gunfighters he’d recently hired encountered a posse which had been sent out to collect Tunstall’s cattle as partial payment of McSween’s debt. In the ensuing battle, Tunstall was killed.

Born in Middlesex, England, Tunstall emigrated to British Columbia when he was 19, then headed for the American West in February 1876, looking for investment possibilities. After six months looking into sheep ranching in California, he went to New Mexico, where he met Alexander McSween.

McSween persuaded Tunstall to move to Lincoln County. Land was cheap there and the profit potential was high. Eighteen months later, Tunstall was dead. McSween would follow him shortly thereafter.

Tunstall’s death not only started the Lincoln County War, it brought the British government into the conflict. The embassy wanted to know how and why their countryman had been killed and his body left where it fell.

As a result of the British inquiries, Frank Warner Angel was sent West to investigate Tunstall’s murder and other New Mexico violence. Angel’s report would put an end to the current Governor’s term and bring Lew Wallace to New Mexico in his stead.

However, it wouldn’t end the Lincoln County conflict. More people would die, including William Bonney, aka Billy the Kid, who’d fought beside Tunstall that February morning, and Juan Patron, leader of the County’s Mexican-American faction and staunch opponent of Tunstall’s killers.

But eventually, the conflict fizzled out. Like so many wars, it started with a bang but ended with a whimper, with no clear winners and a lot of damage that would never be fully repaired.