On Tuesday, Sept. 22, 1846, just over a month after Brigadier General Stephen Watts Kearny seized New Mexico for the United States, he appointed Virginia-born Taos businessman Charles Bent as New Mexico’s first American civil governor. When Kearny and the majority of his 1700-man force headed on to California to participate in acquiring it as well, Colonel Sterling Price, as senior U.S. Army officer in New Mexico, became its military governor. 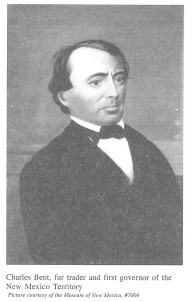 Bent had been in Nuevomexico since 1829, first as a fur trapper, then as a Santa Fe trail trader based in Taos. He occupied his post as Governor less than four months. In mid-January 1847, he died at the hands of a New Mexican mob protesting the American occupation.

Two-and-a-half weeks later, Colonel Price, supported heavily by American businessmen and trappers in New Mexico, crushed that rebellion and assured that New Mexico would remain part of the United States.

Ironically, Price’s own career would include participation in an even larger rebellion against the nation he had helped to force on New Mexico. Following a term as Governor of Missouri, he joined the Confederate Army, rising to the level of General. He died on September 29, 1867, almost exactly 21 years after he took over as military governor of New Mexico.